The Perfect Gun for the Youngest Deer Hunters 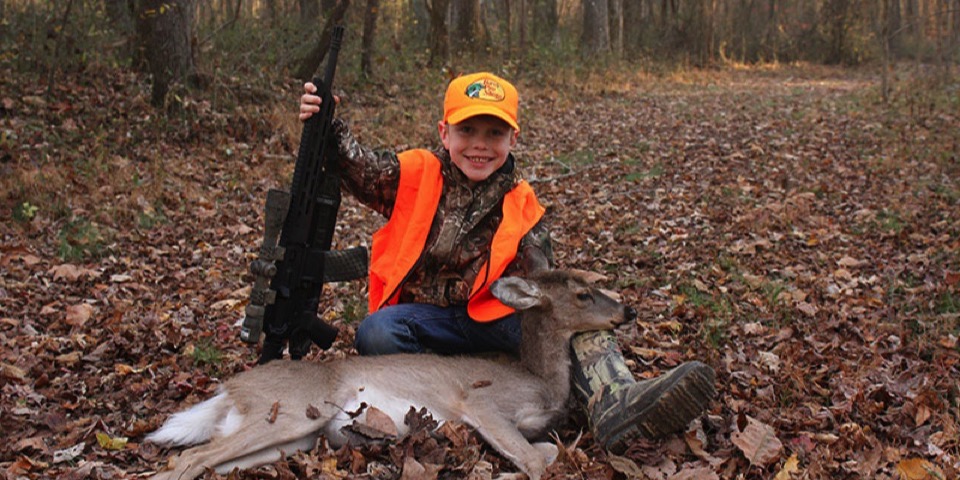 With four little kiddos in my household beginning their hunting career, I’m always on the lookout for the perfect deer gun for the smallest of kids. Like countless other young hunters, I killed my first deer with a lever-action 30-30. It’s a great gun for youth hunters. My daughter killed her first deer with a .243 when she was seven.

The young buck dropped in its tracks, but the recoil was still a little heavy for her. And despite the gun being a youth model, the stock was still too long for my small-framed child. She couldn’t get it up to her shoulder and still be able to reach the trigger. Then a friend introduced me to the idea of deer hunting with a .223 in the AR platform. His son had killed a few deer with it and was impressed with the job the small gun did on deer. After further research, I was sold on the idea that the AR .223 was the perfect deer gun for the smallest of hunters. Here’s why…

The adjustable stock was honestly one of the main selling points when I first became a believer in the AR-style .223 for kids. Youth model guns were designed for youth. Not necessarily for seven or either-year-olds. No gun fits these younger hunters like the AR with an adjustable stock. They can customize the fit to allow them to get the gun to their shoulder while maintaining the ability to get their eye to the scope. No more tucking the stock under the armpit here! The adjustable stock allows you to extend the stock out to “adult-size” when it’s your turn behind the gun. A one-size-fits-all gun? That’s a win!

The recoil, or lack of, is another one of the great points of using the AR .223 for young hunters. Like most kids, mine were a little gun-shy when they first stepped up to the shooting bench. In their mind, a loud gun meant a painful kick. That was until they shot the AR. The recoil is nearly non-existent. One of my boys was six years old when he took his first shots with the AR .223. He was all smiles when he pulled back from the scope after firing those first rounds. It’s just a kid-friendly combination.

Another great aspect of shooting the .223 is the seemingly endless options when it comes to ammo selection. In the past, I’ve likely erred on the side of going to light in our loads when hunting with my kids. Our blood trails have been fairly slim. But this problem is easily remedied with the use of bullets like the Nosler Partition designed for expanded mushroom and a rear core that retains more than half the original bullet weight for greater penetration.

Another great option is Federal’s Fusion ammo. Fusion ammo was designed with a pressure-formed core that delivers incredible penetration and stopping power. These heavier loads for the .223 will no doubt provide the punch and penetration necessary for greater knockdown power and increased blood trails.

The variety of ammo available for the .223 makes it a super versatile gun. I can run light loads while I’m using the gun for hunting predators and drop heavier loads for deer hunting in the fall with my kids. It’s a great combination!

Before I knew better, the .223 was nothing more than a predator gun. I honestly never gave it a second look for deer hunting. I knew it was devastating on coyotes, but that was about it. Again, further research and review led to ample evidence that the .223 was dropping deer in their tracks. My kids have killed a dozen deer with the AR .223 now, and all but one have dropped on the spot.

My son, Aidan, shot a 7-pointer this season with the Mossberg MMA .223. The deer was quartering away from us pretty hard, and Aidan shot the buck like he would have when bowhunting – behind the shoulder. Despite not dropping the deer in its tracks, it was a great shot and the deer went just 40 yards. The other deer my kids have shot have been shoulder shots, and the deer never left the scene. The shot distances ranged from 40-100 yards.

Is the .223 sufficient for killing deer? Absolutely! 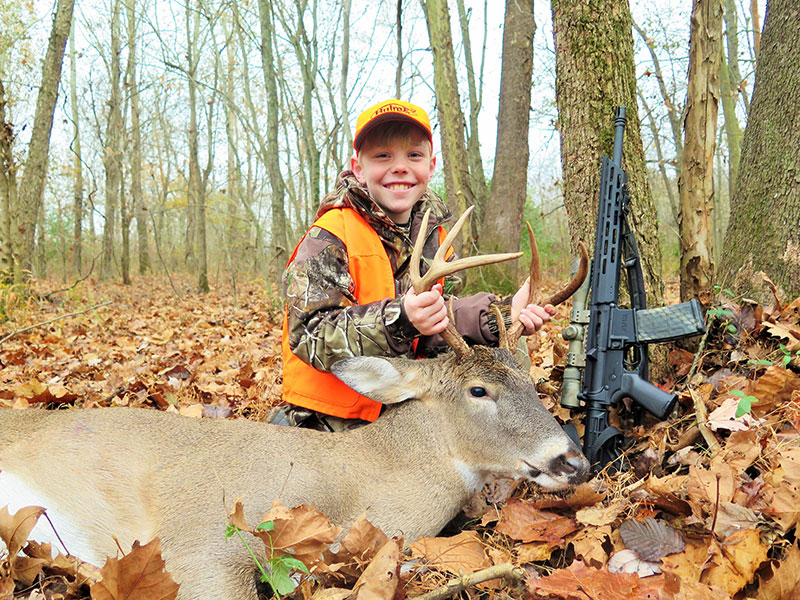 The author’s son, Aidan, with the 7-pointer he killed with the Mossberg MMR .223

Are there any negatives that come with shooting a lighter gun? Sure. Blood trails have been slim to none. In my experience, they just don’t happen. The bullet typically remains lodged in the off-side shoulder. Has this been a problem for me? No. As I mentioned, the furthest we’ve ever had a deer run was 40 yards. It never left our sight. But, if you shoot a deer back off the shoulder he could cover some ground, and blood trails are likely to be slim. This could be a problem in thick cover when the poor shot placement takes place. However, the same could be said for plenty of other calibers as well.

The Mossberg MMR .223 just might be the ultimate option for the youngest hunters in the deer woods

I encourage you to give the AR-style .223 a look when it comes to shopping for the perfect gun for young deer hunters. They are easy to handle and maneuver, light on recoil, but big on impact. Just be sure they are legal in the state you are hunting in. Some states, like Connecticut, require the use of a bullet at least .243 in diameter. And there are some states, like Pennsylvania, with restrictions on the use of a semi-auto rifle for hunting. If that’s the case for you, look no further than the Mossberg MVP Bolt-Action Rifle to stay in the game.

The MMR .223 is a great option for a child’s first deer hunt. Take the time to make it happen in a young child’s life this season. You’ll be passing on the rich legacy of hunting and the outdoors and creating memories for a lifetime.

Late season goose is finally back in! We had a restricted season and limits for the 2020 season,...

The guys grab the Mossbergs and head to the coast in search of sea ducks! Sea duck hunting in Maine...

The Whitetail Collective | Big Buck Down in New Hampshire

The boys head up to New Hampshire for some northern action and are welcomed by the season's first...