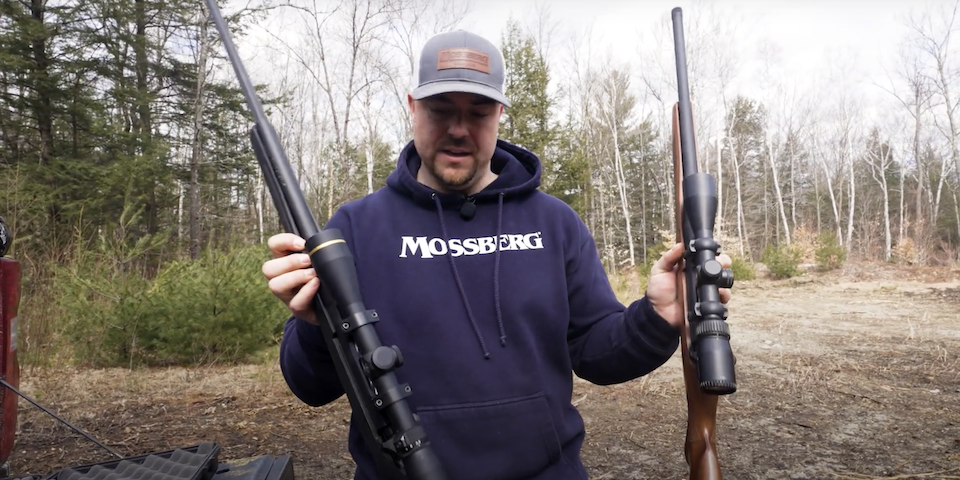 Brett goes over the pros and cons of the .350 Legend and the .450 Bushmaster to help you decide which one is best for your hunting style!

It is a beautiful day in March and we're out here to shoot some rifles. We have a couple out here and I want to talk about Straight Wall Rifle Cartridges.

The two most popular choices are the .350 Legend and the .450 Bushmaster. I have both these and the Mossberg Patriot, this one with the walnut stock, this one with a synthetic.

I'm going to go through both of these options—both cartridges and chamberings—and talk about some of the pros and cons of each one. This should help you when you're considering buying one for a Straight Wall Hunting State.

The first one we're going to talk about is maybe the newest one that has come onto the game. It is the .350 Legend.

It's an extremely low recoil round. That's probably the biggest benefit of it. It's fun to shoot. It's fun for a small-statured person to shoot. A youth hunter. I actually have this one and the youth model for my boys. When they get old enough to shoot, this will probably be their first deer rifle.

It's a lightweight gun compared to the .450. There's just less, less metal on the barrel in action because it's a smaller chamber.

It does a really good job of putting white details down. I think I've shot maybe five or six whitetails with this gun over the past couple of years, and all of them have gone down within 100 yards. It's really easy to shoot accurately.

I guess probably some of the cons of this gun. It's just not a very high-energy round and it's not very flat shooting. Whenever you have a bigger diameter bullet, like a 35 caliber, that shoots low weight for caliber bullets—like 150 grand bullet—you're just not going to have a high ballistic coefficient.

You're also not going to get the velocity with a straight wall cartridge. So overall, this is a pretty low-octane round for hunting. It's great for whitetails, within reason, inside 150 yards, and in really good shape but this is not a long-range gun. You can't push it very far. You also want to take into consideration your shot angle more so than you would with a bigger caliber gun.

If you're hunting short-range (150 yards) and are a youth hunter or a small-framed adult hunter, there's almost zero recoil with this gun. It's a great gun to have fun with as you can hit what you're aiming at and take down plenty of whitetails.

At the opposite end of the spectrum from the .350 Legend is the .450 Bushmaster.

Compared to the .350 Legend, the .450 Bushmaster has more energy. You're going to have a lot more leniency with your shot angles. Also, you're going to be able to shoot a lot more.

This isn't a long-range gun by any means. Once again, it still has a pretty poor ballistic coefficient because it's a big-diameter bullet.

But, it shoots a lot further. My buddy actually shot a whitetail, I think, at 230-40 yards with this gun last fall. Made a great shot.

If you're a hunter that hunts some bigger open areas, maybe a field, big food plots, or wide open timber, you might want to opt for the .450 Bushmaster.

Probably the biggest downfall is the recoil, although I think the recoil is overstated a bit on this gun, from what I've seen, it has significantly more recoil than .350 Legend.

If you're a youth hunter, smaller framed, or just a recoil sensitive Hunter maybe the .450 Bushmaster is not the gun for you. But if you don't mind recoil, you don't mind carrying around a little bit heavier gun, and you want that extra energy for terminal ballistics on the animal (at a longer range) this gun is a great option for you.

There are obviously more options, but I think these are probably the most modern and popular options for a Straight Wall Cartridge Deer State.

I know Ohio has gone to Straight Wall Cartridge. Michigan, Iowa, and I've heard that Illinois is going to as well. So as these regulations allow you to hunt with a Straight Wall, rifles have become more and more prevalent and more people are going to be going to these straight wall rifles.

They offer a lot of benefits over a muzzleloader or a shotgun, being a lot more accurate and having far less recoil. These guns are great. We love hunting with them in Ohio. And we will just pick whatever cartridge works best for the particular situation we're going to hunt in this fall. 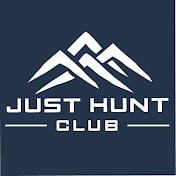 Just Hunt Club is a team of highly motivated Northeastern hunters that chase game and fish in a diverse and often overlooked region of the country. They have learned to adapt and be successful on mostly public access lands in extremely challenging circumstances. Whether chasing ducks, bucks, turkeys, or fish, these outdoorsmen demonstrate how to use extremely effective tactics to be successful while also showing the rich outdoor tradition and culture of the North-Eastern states.
See all articles by this author 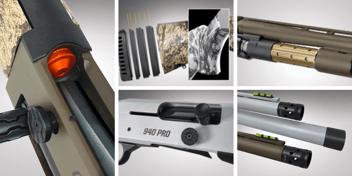 The new 940 Pro Autoloaders. Inside, you will find a durable gas system that allows for up to 1500... 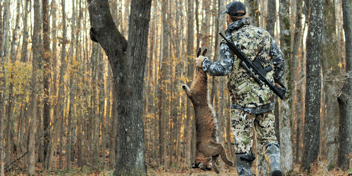 Opinions are like elbows. Most everybody seems to have a couple of them. And when it comes to... 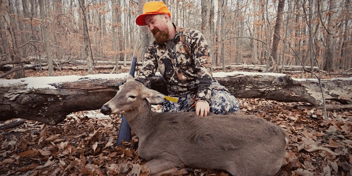 The boys have gone out for one of their favorite weekends of the year: Opening day of New York...